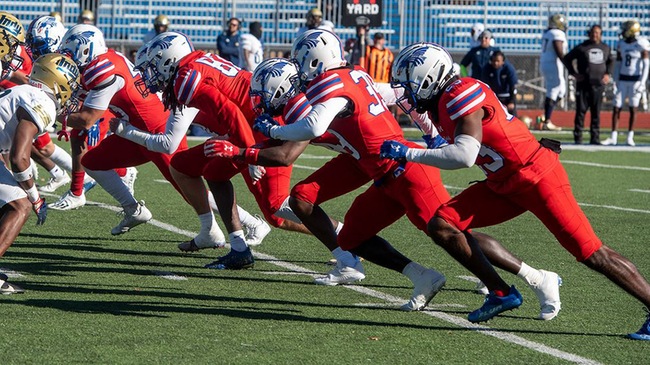 Blue Dragon Football is No. 1 for a seventh consecutive week. The Blue Dragons head into the NJCAA postseason No. 1 for the second time in three seasons. (Andrew Carpenter/Blue Dragon Sports Information)

HUTCHINSON, Kan. – The Jayhawk Conference champion Hutchinson Community College Football team will head into the NJCAA National Playoffs as the No. 1 team in the nation.

The final regular-regular season poll was released on Monday and the unbeaten Blue Dragons (10-0) stayed on top for the seventh-straight week and will play host to 1 of the 2 NJCAA National semifinals on the weekend of December 3rd at Gowans Stadium.

The official pairings with dates, times and opponent will be released by the NJCAA on Tuesday.

Snow College (8-2) defeated Lackawanna 30-7 on Saturday in Scranton, Pennsylvania, but the Badgers weren’t able to pass Coffeyville into fourth place. The Blue Dragons defeated Snow 29-27 in the 2020-21 national championship game two seasons ago.

Butler was the third and final team from the KJCCC to be ranked. The Grizzlies are in a good spot to play in a postseason bowl game. Those matchups should also be released on Tuesday by the NJCAA.

This is the second time in three seasons the Blue Dragons head into the postseason as the No. 1 ranked team. Two seasons ago, there was no national semifinal round so the Blue Dragons and Badgers went directly to the national championship game, which was played at War Memorial Stadium in Little Rock, Arkansas.