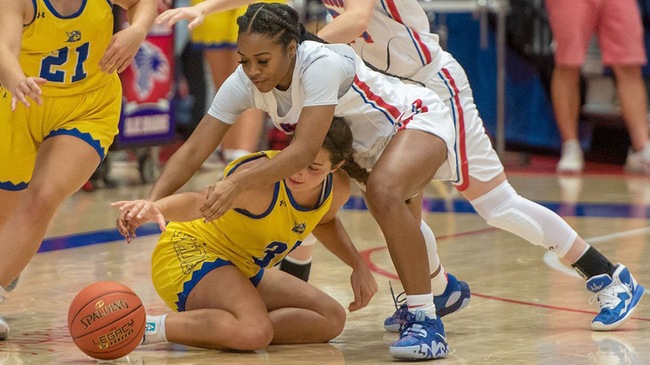 HUTCHINSON, Kan – After a dominant opening week, the Hutchinson Community College women’s basketball team is in the top 5 in the first NJCAA Division I national rankings.

The last time the Blue Dragon women were ranked in the top 5 was back in February 2020 when they were No. 5.

Hutchinson went 2-0 in its BSN Sports Tipoff Classic with sophomore Mya Williams guiding the Blue Dragons to an 84-48 win over Mineral Area behind her game-high 21 points as well as the team shooting nearly 50 percent from the floor. The Blue Dragons closed out the opening weekend with an 84-61 romp over Northeastern Oklahoma where freshman Journey Armstead posted 14 points and seven assists. Three players scored in double figures – Williams with 21 points and sophomore Kali Howard with 18.

Trinity Valley is No. 1 in the rankings with preseason No. 1 Tyler falling to No. 21 and former No. 2 Shelton State dropping to 23. Northwest Florida State is No. 2, Blinn is No. 3, and South Plains is No. 4. Other Jayhawk conference teams ranked are Barton at No. 18, and Dodge City received votes.

This weekend, John Ontjes’ group heads to Great Bend for the two-day Cougar Booster Club Classic where the Blue Dragons will play Labette at 1 p.m. Friday and Redlands at 1 p.m. Saturday.