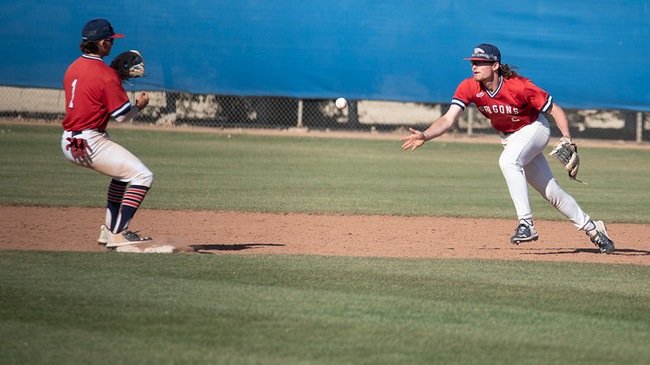 The Blue Dragons were held to just two hits and Johnson County erupted for 10 runs in the second inning as Hutchinson fell 12-2 in five innings in the Blue Dragons’ second game of the day.

tossed a complete game in a 5-2 elimination game victory over the Butler Grizzlies, which made the Blue Dragons the lone-remaining Jayhawk West team in the tournament.

Leading 1-0 through one inning, the Blue Dragons used three pitchers to get out of the tough second inning in which Johnson County sent 13 batters to the plate and scored 10 runs on six hits, including two home runs.

and a double by

to the left-center field gap.

Hutchinson’s second run didn’t come until the fourth when

was hit by a pitch and moved to second on a passed ball and third on a wild pitch. Torosian scored on

Henderson and Logan tallied the only hits for the Blue Dragons.