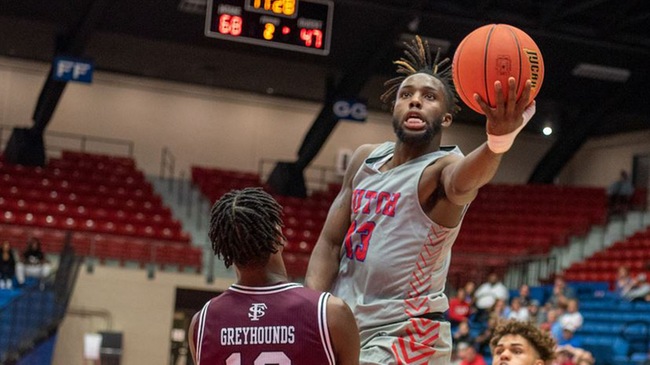 HUTCHINSON, KAN. – Tommy DeSalme’s second year at the helm of the Hutchinson Community College men’s basketball begins in the top 10 of the first national poll of the regular season.

The Blue Dragons were ranked No. 6 in the week 1 NJCAA Division I national rankings, which were released Monday. Hutchinson jumped into the top 10 from No. 13 in the preseason rankings after scoring over 110 points in each of its first three games, beating Fort Scott 124-101, previous No. 7 Triton 113-105, and Northeastern Oklahoma 117-107.

Sophomore Jayden Garrison scored a career-high 29 points in the season-opening win over Fort Scott as the Blue Dragons also hit 14 3-pointers, which tied a Blue Dragon single-game record. In the Triton win, redshirt freshman Aaron Franklin poured in a career-high 34 points, 20 coming in the second half on the primetime slot on opening night of the BSN Sports Tipoff Classic. Freshman Ty Frierson hit six 3-pointers in the win over NEO to move the Blue Dragons to 3-0.

Coffeyville, the 2020 national champion, came in at No. 12. Butler climbed from preseason ranking No. 23 to No. 18. Seward County is ranked 21. Garden City, Cowley, and Dodge City received votes.

Last year’s national champion Northwest Florida State is 3-0 and is No. 1 in the poll.

The Blue Dragon men hit the road to Great Bend for the Cougar Booster Club Classic Friday and Saturday. The Blue Dragons open the two-day classic at 3 p.m. Friday against Victoria College and cap off the weekend at 3 p.m. Saturday against Wilbur Wright College.