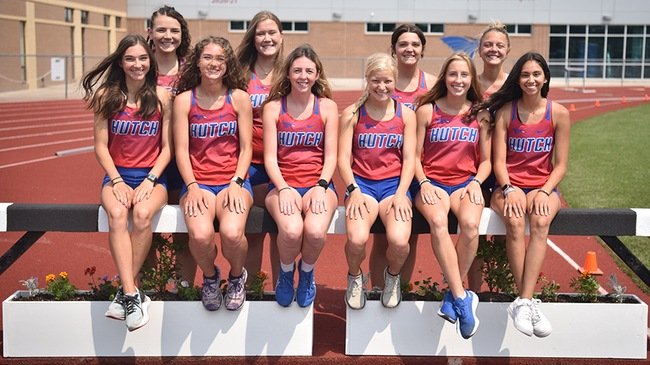 Violet Martinez
headline the opening-day action for the Hutchinson Community College women’s track and field team at the 2022 NJCAA Division I Outdoor Track and Field Championships at Gowans Stadium.

Also looking to make some headlines will be the Blue Dragon women’s 4×800-meter relay team on the first of three days of action.

Cocking, an All-American in cross country and indoor track, looks for her first outdoor All-America honors when she runs in the 10,000 meters at 7 p.m. Cocking hasn’t run the 10,000 this season, but she will run as a coach’s entry. Cocking will also run in the 5,000 meters on Saturday. The Blue Dragon sophomore distance runner is ranked fourth in the nation in the 5,000 with a qualifying time of 17 minutes, 57.27 seconds set at the KT Woodman Classic on April 6.

Martinez is a two-time pole vault All-American, finishing sixth in the 2021 outdoor championships in Levelland, Texas.

Martinez has a personal best clearance this season of 10 feet, 6 inches, which is ninth in the NJCAA. All-American and teammate

Kiana Brown
is injured and won’t be able to participate. She was ranked fourth in the NJCAA before the injury.

The Blue Dragon 4×800-meter relay is ranked sixth in the NJCAA this season, qualifying with a time of 10:04.20 in the Friends Invitational on April 2. The relay team of

Anastasia Meyer
will run at 5 p.m. on Thursday.

The Blue Dragon women had eight total qualifiers for the 2022 outdoor championships.

Hannah Schrock
qualified in two events for the Blue Dragons. Schrock opens her championship at 11 a.m. on Thursday with the hammer throw at the State Fairgrounds Park on Severance Avenue. Schrock is ranked 17th in the hammer with a PR of 142-1 at the Region VI Championships two weeks ago in Garden City.

Sophomore Noel Buckhaults will compete in the 3,000-meter steeplechase at 4:30 p.m. on Friday at Gowans Stadium.

Buckhaults is 16th in the NJCAA with a time of 12:11.08 set at the Southwestern Jinx Invitational on March 26.

Pipeliners Look to ‘Reset’ After 4 Straight on the Road

Steinert Reaches Podium on Day One of NJCAA Championships