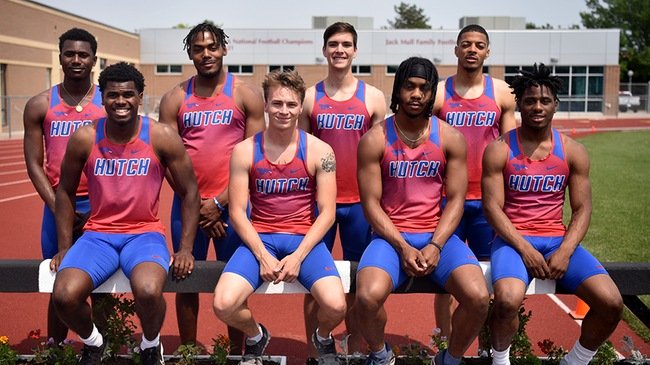 
HUTCHINSON –
A total of nine Hutchinson Community College athletes will represent the Blue Dragons in 12 events on their home track at Gowans Stadium beginning Thursday.

Gowans Stadium will play host to its seventh NJCAA Division I Outdoor Track and Field Championships and first since 2017 beginning Thursday.

The Blue Dragons will have four entries competing on Thursday.

is the highest nationally ranked Blue Dragon entering the 2022 championships.

Cooper is eighth in the shot put after a top distance of 53 feet, 7.75 inches set at the Tabor Invitational on April 23.

Cooper will compete in the shot put at 11 a.m. on Friday at Gowans Stadium.

Cooper is one of two Blue Dragons to qualify in two individual events.

Cooper is also entered in the discus, which will be at 1 p.m. on Saturday. The sophomore from Junction City is ranked 13th in the NJCAA at 154 feet, 1 inches, which was set at the Southwestern Jinx Invite on March 26.

Thompson will actually compete in four events for the Blue Dragons.

is ranked 16th in the NJCAA with a time of 41.32 seconds set at the Region VI Championships two weeks ago in Garden City. The 4×100 relay preliminaries are at 5:45 p.m. on Thursday.

The Blue Dragon 4×400 relay team of Gardenhire, Brown, Thompson and

enters Thursday’s 5 p.m. event with the ninth-best clearance of 14 feet, 1.25 set at the Tabor Invitational.

Hamilton qualified for the 400-meter hurdles at the Friends Invitational on April 2 with a time of 53.83 seconds. He is ranked 14th in the NJCAA. The 400-meter hurdle preliminaries are at 6:15 p.m. on Thursday.

is ranked 15th in the NJCAA in the triple jump after going 48-1.25 at the Region VI Championships.

The first Blue Dragon to complete on Thursday is Browne in the long jump. Browne is ranked 20th after a season’s top jump of 23-9.5 at the Region VI Championships.