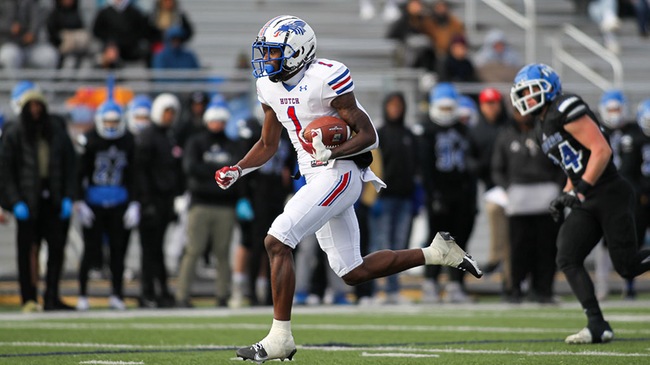 Malik Benson sprints for a 67-yard touchdown on Saturday in No. 1 Hutchinson's 29-28 win over No. 4 Iowa Western. The Blue Dragons remain No. 1 in the NJCAA National Rankings (Billy Watson/Blue Dragon Sports Information)

HUTCHINSON, Kan. – After one of the wildest weekends of the 2022 NJCAA football season, there was a major shakeup in the Division I national rankings, released on Monday.

The only thing that stayed the same was that the Hutchinson Community College football team remained No. 1 after Saturday’s come-from-behind 29-28 win at No. 4 Iowa Western in Council Bluffs, Iowa.

The former Nos. 2, 3 and 4 teams in the rankings all lost on Saturday, creating a major shift.

There are two games still to be played in the NJCAA before the final poll is released next Monday. No. 11 Kilgore and No. 6 New Mexico Military plays in the Southwest Junior College Football Conference championship game and No. 5 Snow College travels to No. 7 Lackawanna College.

The top four teams from next Monday’s final poll will play in the NJCAA National semifinals either December 3 or 4 at the sites of the Nos. 1 and 2 teams in the final poll.

Hutchinson is the lone remaining unbeaten team in the NJCAA and received all 11 first-place votes.

The shake-up started with Northwest Mississippi falling to East Mississippi 36-28 in the MCCAC Playoff championship. Then No. 3 Trinity Valley fell 38-10 to Kilgore in the SJCFC semifinals. Then, there was the No. 1 Blue Dragons’ win over the No. 4-ranked Reivers.

Hutchinson trailed Iowa Western 28-17 with 8:34 to play in the fourth quarter. Dylan Kedzior immediately got the Blue Dragons within five points with a 70-yard touchdown run with 8:11 to play.

The Blue Dragons enter the postseason No. 1 for the second time in three seasons. The Dragons also reached to 10-win plateau for the eighth time in program history.