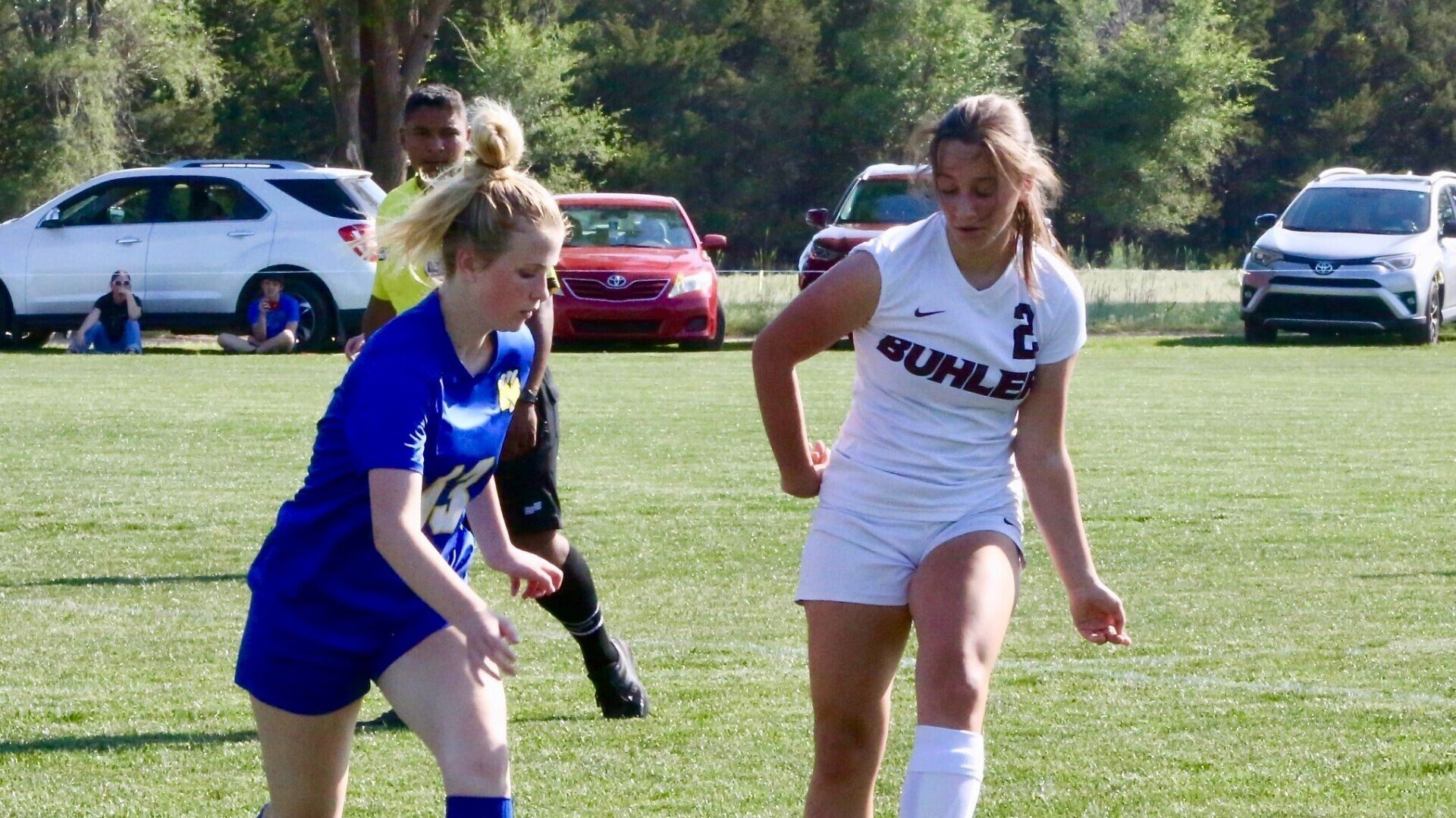 Buhler’s Clara Paulino dribbles the ball against Nickerson’s Kieryn Ontjes in a match on May 10, 2022. Photo Credit: Bob Hunter

Even after all the games were played, there were still some tiebreakers to sift through, but KSHSAA sorted it all out Saturday morning when it released the regional soccer brackets.

Here are five storylines to watch for in the coming week for area teams.


What a turnaround for Nickerson
After winning just three games last season, Nickerson went 7-8-1 in the regular season, which was good enough for eighth place in the Class 4-3-2-1A West standings. That ensures the Panthers a first-round home game, which will come at 4 p.m. Tuesday against Rose Hill.

It will be the second time the teams have met this season. On April 18, the teams tied 1-1 at Nickerson.

It would be quite the accomplishment for Nickerson to not only get to eight wins, but also play for a regional championship.


Same teams, different destination for Hutchinson
What are the chances? Last year, Hutchinson drew Dodge City in the first round of the Class 6A West regional, while Campus played Wichita Northwest in the other semifinal.

It was a competitive tournament, as Hutchinson won a 3-2 double-overtime thriller, and Northwest survived Campus in a penalty-kick shootout. Northwest then edged Hutchinson 1-0 in the regional championship game.

The same four teams got grouped together again. Only this time, Hutchinson (8-8) is the 10 seed and heads to No. 7 Northwest (8-6-2), while No. 15 Campus (2-14) plays at Dodge City (12-3). Will this regional have the same drama last year did? The task looks tall for Campus, and while Hutchinson has improved its win total and Northwest’s has slipped, Northwest played a brutal schedule.


Buhler should be happy with draw
Buhler was likely keeping an eye on Wichita Trinity and breathed a sigh of relief when Trinity was shipped to a first-round matchup with Wichita Classical. While just 4-12, Trinity played a remarkably-tough schedule that included top 6A and top 5A teams.
No. 5 seed Buhler (8-7-1) shouldn’t have much trouble in its regional opener against No. 12 Wichita Independent (2-9-1), and then the fun starts. The Crusaders would likely travel to Augusta for a second time this season. Augusta, which is seeded fourth with an 8-7 record, has won six in a row, one coming in a 2-1 overtime win over Buhler.

Get by that game, and Buhler would look at a state quarterfinal showdown against either archrival McPherson or a Mulvane team that eliminated Buhler in last year’s quarterfinals. With Buhler as healthy as ever, it’s a team to watch for.


McPherson loses out on top seed because the Bullpups challenged themselves
McPherson and Mulvane tied each other this season, and thus when both teams ended the season 12-3-1, the tiebreaker had to be broken with fewest goals allowed.

Mulvane won by allowing 17 to McPherson’s 18.

Both teams played tough in-season tournaments (McPherson lost to Maize South and Hays in its tournament, while Mulvane fell to Garden City at the North Cup), but the biggest difference was McPherson playing Bishop Miege. Miege, the 4A soccer bully, won 2-1 at McPherson. Had McPherson opted for an easier game, it would have likely gotten the top seed. But that’s never been how coach Chris Adrian rolls. And for good reason. Should McPherson play Miege again, the Bullpups will know they have a chance to win.

Besides, as the 2 seed, McPherson still has home-field advantage through the quarterfinals.

It should also be noted that Trinity beat a pair of 9-7 6A team, Wichita North and Wichita East, by a combined score of 9-0.