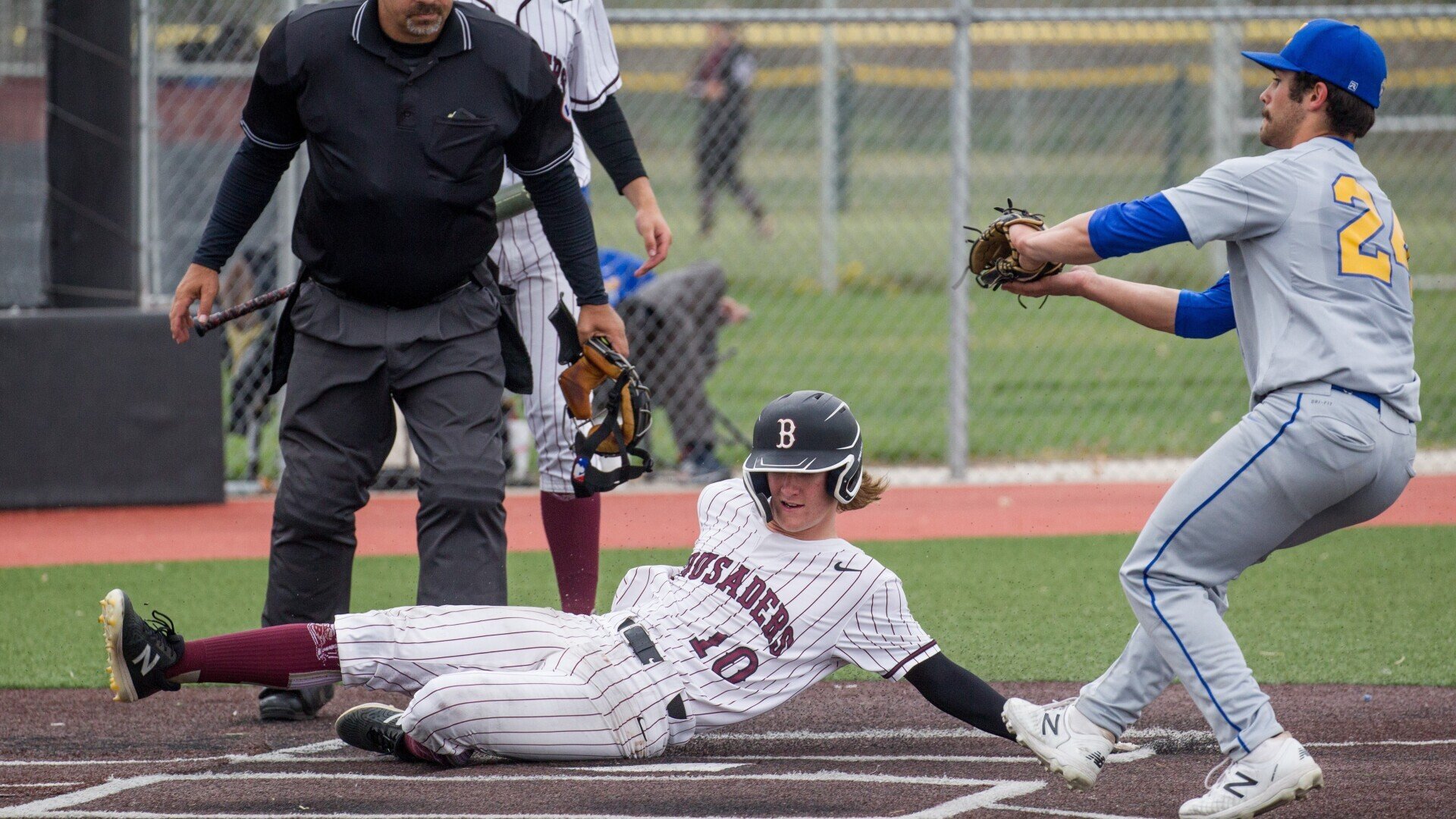 Buhler’s Levi Atherton (10) slides to home plate safely in a game against Circle on April 21, 2022. Photo Credit: Foto Cowboy
By Brad Hallier
Every spring high school sport in Kansas is now in postseason mode. That was finalized Saturday, when the Kansas State High School Activities Association announced the baseball and softball brackets for Classes 6A, 5A and 4A.

There will be a lot of baseball and softball played early in the week, and with favorable weather in the forecast, regional champions should get plenty of time to bask in the glow of a trip to state.

Here are five storylines to watch for from area teams.

An unlikely simmering rivalry could grow
Geographically, it doesn’t look like a rivalry. Nevertheless, Buhler and Circle – separated by 65 miles – have developed quite a rivalry in the last year.

Last May, Circle upended Buhler at Wheatland Park to win a regional baseball championship. Buhler pumped the brakes on Circle’s great football season in the fall with a 76-0 annihilation. Then in basketball, the Buhler boys won a thrilling 59-53 game.

Now, the two are on course to clash in the regional championship game again. Buhler comfortably swept the regular-season series, 6-1 and 11-0. Fourth-seeded Buhler (15-5), however, should remember last year’s regional well. After nearly losing to Rose Hill in the first round, Circle beat the Crusaders on their home field. They shouldn’t take No. 13 Clearwater (8-12) lightly, especially considering seven of Clearwater’s losses came by three runs or fewer, or in extra innings.
Beat Clearwater, and then maybe prepare for Circle (13-7), which plays archrival El Dorado (8-12).

Andale/Garden Plain is back with a vengeance. The Indians are 18-2 and the No. 2 seed in 4A West, having gone 18-1 since a season-opening loss to No. 3 seed McPherson.

Andale/Garden Plain has a good path, needing to beat 5-15 Wellington, and then either 11-9 Winfield or 11-7 Concordia. It’s a team that rarely slips and has worn a path between the Renwick school district and Salina, site of the 4A state tournament.

Hutchinson softball an underrated team
The Salthawks didn’t get a great draw for the Class 6A West regional. They earned the No. 11 seed at 8-12 and will head to Derby to take on No. 6 Manhattan (14-6). But gosh, the Salthawks played a tough schedule, and AVCTL Division 1 was pretty much the Big 12, with Newton and Derby leading the way.

But that means that the Salthawks shouldn’t be overwhelmed by anything they see from Manhattan. Coach Clayton Evans is piecing something together, and the Salthawks made strides this year.

A double Mac attack?
It could be a busy Memorial Day weekend for McPherson fans. Not only does it appear Bullpup girls soccer has a good chance of playing at state, but so do McPherson’s baseball and softball teams.

McPherson’s softball team (17-3) is the No. 3 seed and hosts a regional Tuesday. The Bullpups, however, could have a difficult championship game against No. 6 Rock Creek (14-6).

Why no play-in games?
Just a befuddling ordeal. For some reason, the larger classifications don’t allow play-in games for teams seeded 17 and 18. Makes zero sense.

In smaller classifications, they are allowed. Case in point, Nickerson baseball taking on Smoky Valley in a 3A play-in game Monday in Halstead.

But why not in 6A, 5A or 4A? This means Hutchinson baseball and Buhler softball don’t get to play in the postseason.

Yeah, yeah, save the “they aren’t very good so they don’t deserve to be there” rubbish. There are 15 baseball teams in Kansas with two wins or fewer and playing this week, including 2-16 Wichita Southeast, which made the postseason mainly thanks to Hutchinson having played a full schedule and going 2-18.