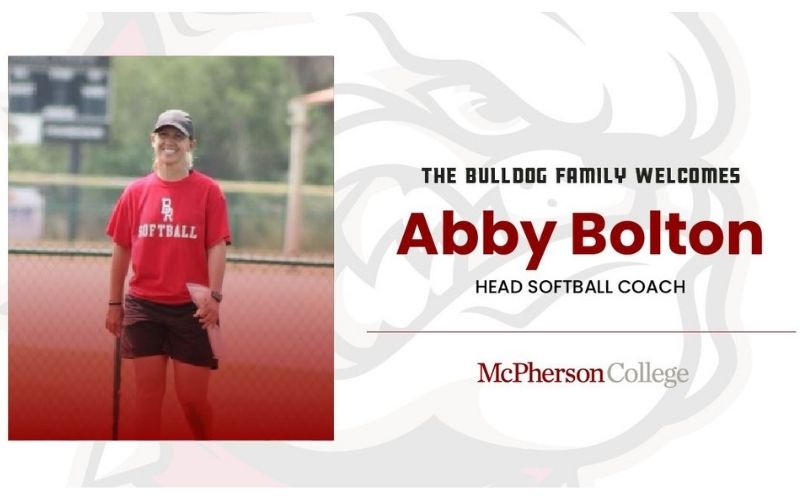 McPherson, Kan. – Abby Bolton has been hired to take over the reins of the Bulldog softball program at McPherson College, according to Chandler Short, athletic director.

“I am so thankful for the opportunity to join McPherson College,” Bolton said. “I think they have a great atmosphere for student-athletes and I am excited to be a part of that. I am honored to be able to follow in the footsteps of my former coach, Tony Segovia. Go Bulldogs!”

In her first year as head coach at Seward County, Bolton led the Lady Saints to a 38-21 record while winning a program-record 22 Jayhawk Conference games. The Lady Saints reached the Region VI championship game for the eighth time in 11 years, before falling to Butler. By the end of her first head-coaching season, she helped place 10 Lady Saints on the Jayhawk All-Conference Team, which tied a conference record.

The Lady Saints averaged just short of 40 wins in Bolton’s ten seasons, and she watched as 46 players were named to the Jayhawk West All-Conference Team.

As a student-athlete, Bolton remains in three Seward County softball all-time single-season record books, including seventh in doubles (20), 11th in base hits (70), and 11th in runs scored (53). She earned an associate degree in science at Seward County before completing her education and athletic career at Friends University. Bolton is originally from Colorado Springs.
“Coach Bolton understands the importance of being a student-athlete and will continue to lead our softball program in the right direction,” Short said. “I can’t wait to work with her and continue to compete for the KCAC commissioner’s cup without compromising our core values. We are excited for her to get started this summer.”