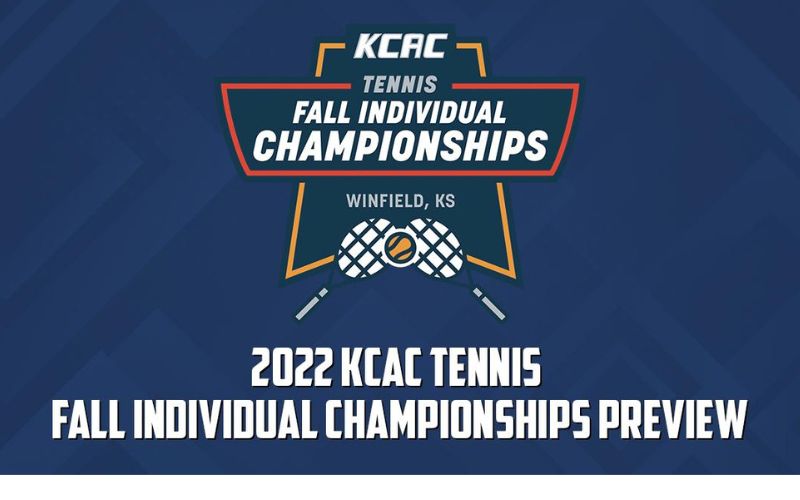 WICHITA, Kan. — Southwestern College will once again be the host of the annual Kansas Collegiate Athletic Conference men’s and women’s tennis fall individual championships this Friday and Saturday, Sept. 23-24.  The action will begin at 8 a.m. both days. The annual event will consist of six singles flights and three double flights for both the men and women.

The majority of the action on both Friday and Saturday will take place at the T.H. Vaughan Tennis Center in Winfield, which was built through the cooperation of Southwestern College, USD 465 and the City of Winfield, and expanded to 14 courts prior to the 2013 spring tennis season. For directions to that site, click here.

Due to the addition of two new tennis programs this season in Saint Mary and Evangel and the expansion of the tournament field, the KCAC has arranged to have additional courts on Friday, near Derby Middle School. For directions to that site, click here.

In the men’s singles field, five of the singles champions from last year’s KCAC Tennis Fall Individual Championships return. Michael Beltran of McPherson is back to defend his No. 1 Singles title. Beltran may have to face off against the 2021 Men’s No. 2 Singles champion Milan Bucek of Bethel, who has moved up to the No. 1 flight this year.

In men’s doubles, Bucek, Benjamin Erdmann of Southwestern, and Daniel Marcano and Trey Murphy, both of McPherson were all part of doubles championship pairings a year ago (Bucek in No. 1 Doubles, Erdmann in No. 2 Doubles, and Marcano and Murphy together in No. 3 Doubles), but return this year with new partners. Bucek remains in the No. 1 Doubles bracket alongside junior Tomas Quercia. Erdmann moves up to the No. 1 Doubles field with partner Ryan Kitchin. Marcano is now in the No. 2 doubles field alongside partner Oscar Brouwer, and Murphy is joined by Zhiyuan Wei in the No. 3 doubles field.

In women’s doubles, Coe returns to defend her No. 1 doubles title from a year ago, albeit with a new partner, junior Mariana Ochoa. Maxey and Kendra Maples of McPherson return as doubles partners after winning the No. 3 doubles flight a year ago. Maples and Maxey will compete in the No. 2 doubles flight this time.